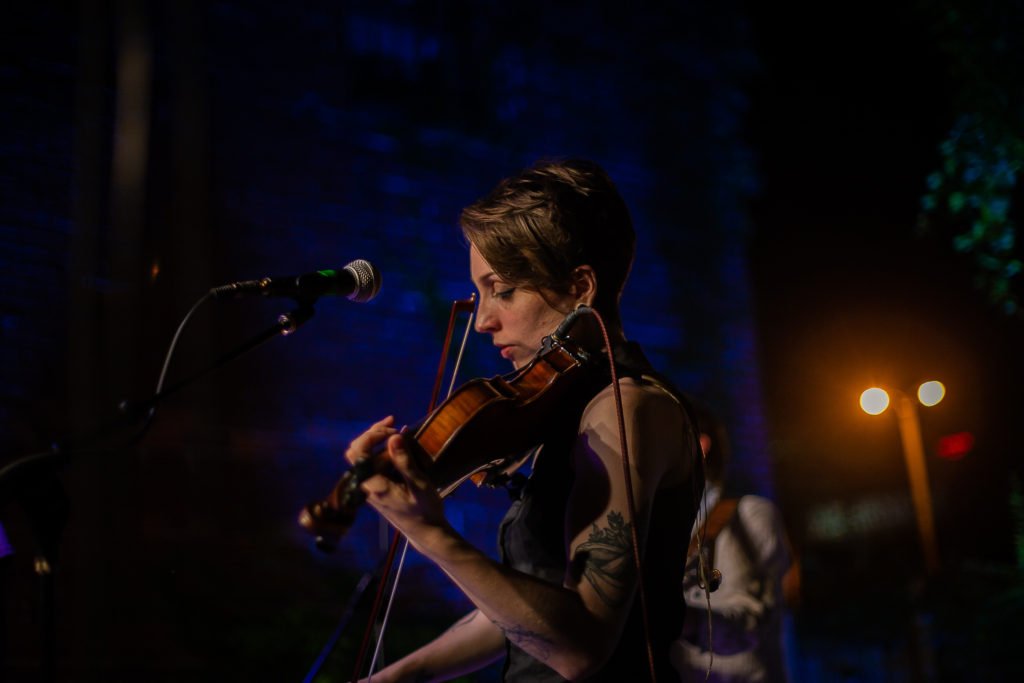 Where are you based?

Brooklyn, New York
Which instruments do you play? Do you sing?

My main instrument is violin, but I also play a bit of viola and of tenor guitar/banjo. I do sing a lot of background harmonies these days, but if I’m leading a tune it tends to be instrumental.

Tell us a bit about your musical background.

I was born in California, and started at 10 right after moving to a Florida. I began by learning fiddle tunes by ear, and gradually took it from there. My childhood teacher was Gabe Lewis for my primary foundation training, which is where I learned to sight read. When I was 14 I began studying Texas Contest Style fiddle with Luke Bulla. At this point I had begun living in Oklahoma and he would either come to my home and stay for a weekend of lessons each month or I would visit him in Nashville. I began attending a lot of the well known fiddle contests such as The Grand Masters, Winfield and Weiser. When I was 16 I placed second at Winfield and have had a lot of various finalist placings with a handful of first placings at state competitions. At this time I was also going to a host of fiddle camps- namely Mark O’Connor’s and Randy Elmore’s. I was also lightly studying some classical music at the time and beginning to wrap my head around jazz and swing improvisation. In 2008, I was accepted at Berklee College of Music where I primarily studied jazz and contemporary folk music with Rob Thomas, Christian Howes, and Darol Anger. I’d like to make a special mention of the late a John McGann who was an absolute joy to work with and was instrumental in helping my understanding of music theory. In 2010, I moved to New York where I currently live and work. l believe my first venue performance was when I was 16, was showcased a guest musician with the house band at The Oklahoma Opry. These days I play everywhere from clubs, to restaurants, private events and the occasional pirate ship (believe me, not the strangest context.) I also really enjoy session work and have gradually moved into spending more time in the studio. Every now and then I end up on the road for a couple of weeks as well, which is always fun. Good story fuel, at the least.

What are your favorite styles to play?

At the moment I’m playing a lot of contemporary bluegrass and western swing, but also like the challenge of reading down classically oriented charts. Both are stimulating, just in very different ways. I go through a lot of phases with these things.

Are there any recent performances that were extra special for you? Or any venues you particularly love?

In 2016 I had the privilege of working at NBC for four months as a member of the house big-band on the Maya and Marty Show. That was incredible. I think that likely tops both the venue and the performance list and I would love to do more similarly oriented work.
Have you recorded any albums, EPs or singles?

I have! I’m on a number of fellow musicians’ records and recorded a portfolio-style EP a while back. It’s currently available on iTunes, Amazon and Spotify and entitled “Overdue Quickstep”. I plan to release a lengthier album with more creative exploration in the near future. I also perform regularly with the 8bit Big Band (@the8bitbigband led by Charlie Rosen.) The best way to keep up with my projects and listen to the other work I’ve done is via my website: www.goodmanviolin.com

Do you have any exciting projects or upcoming gigs on the horizon?

On February 27th, 2019 I am leading a great western swing ensemble at The Manderlay at The Mckittrick Hotel (host of Sleep No More). Doors at 10:00PM, show from 10:30-11:30PM. There is no cover for entry to the show itself, though seats are limited. Reservations can be made via their website should you want to guarantee a table. In May my friends Joanie Leeds and Mathew Check are also releasing a killer bluegrass album that I’m playing on. there is an album release show on May 30th at 7PM at The Bitter End. You can follow their work via Instagram at @joanieandmatt

If you had to pick one each, what would you say are the best and worst things about being a professional musician?

The best is, naturally, being able to connect and play with such a huge variety of different musicians that are all at such a high caliber. I feel humbled to be within the community here in New York and it really pushes me to stay sharp and (ideally) open to growth on multiple levels. I have so much love for my friends and band mates. I’m continuously impress by the amount of mutual support that exists in a sometimes very high tension atmosphere.

The worst is likely just dealing with off-handed comments from non-musicians that deny the possibility that doing this for a living is worthy of the same credit as someone with a 9-5. We’re on the clock constantly, it just takes a different shape and you don’t see most of it in public (ideally…). I also don’t care for being set apart in ways related to my gender- whether it’s positive or negative, I typically find it either boring or patronizing. I’m just a musician.

What have you been listening to lately?

I listen to so much music. I feel like I rarely go out without headphones in. Lately it’s been a lot of Louvin Brothers deep cuts, Greg Liszt’s “Five String Banjo” record, and Devotchka (throwback to high school).